NUT organized an event “Let’s talk in English with other children!” and supported online international exchange (2021.3.9)

On Tuesday, March 9, Nagaoka University of Technology (NUT) organized an event “Let’s talk in English with other children!” with a view to exchange between Nagaoka Municipal Nakanoshima Chuo Elementary School (hereinafter abbreviated to NakanoshimaCES) and children from overseas. This event was held in response to a request of NakanoshimaCES which focus on English and global understanding learning, and NUT provided various support for them such as coordination with overseas elementary schools, connection test for Zoom, and facilitation of group activity on the day. It was a splendid event and approximately 110 fifith and sixth graders from NakanoshimaCES and approx. 100 overseas children (from India, Sri Lanka, Bangladesh, and Mexico) took part in as a speaker. In total, more than 500 people (children as an observer, NUT students as a facilitator, and faculty & staff member of NUT as a supporter) were participated.

At the beginning, Ms. Kaneko, principal of NakanoshimaCES gave an opening remark and an explanation of this event at main Zoom room, then the participants carried out “Ice Break” to communicate with each other. Children taught word of greeting one another with foreign people and played Janken game (rock-paper-scissors game) and learned original language (ITADAKIMASU and MOTTAINAI) in Japan during the Ice Break.

Next, participants were divided into 18 groups, then they moved to breakout room for group activity. In the group work, children introduced by themselves in English following facilitator introduced by themself in English. Children asked and answered questions, and made original pose for taking group photos. Staff members were also divided into groups and supported student facilitators and children for ensuring the smooth activity.

In the end, participants assembled in a main Zoom room, and representatives of each country gave comments for today’s event such as “I was happy to join this event,” “I knew other countries’ culture through this event,” “It was good for me to communicate with others in English,” and “Thank NUT for organizing this event.”
In the future, NUT, as a hub university of SDG 9, will cooperate with local governments including elementary schools, and make an opportunity to enhance motivation to learn English. Also, NUT will support to increase interest in overseas for children and contribute to achieve the SDG 4.

Some of the participants 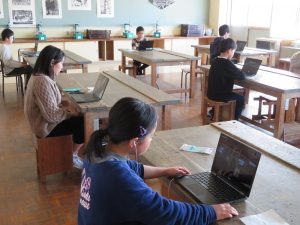