Although implementing countermeasures for marine plastic wastes is an issue on a global scale, the current situation of maritime floats and wastes has not been fully figured out. In order to improve the status quo by recovering and removing maritime floats and wastes systematically and efficiently, it is essential to obtain basic data on the distribution and abundance of coastal drifts. However, since the coastline of Iwate Prefecture is long and also shows Rias-style irregularities, a lot of man-power, time, and funds are required. This research will develop a low-cost survey method for grasping the actual situation of drifts on the coastline of Iwate Prefecture and for clarifying the location and quantity of coastal drifts, utilizing smartphones from the cooperation of local people.

Research Contents and Results: Survey of maritime floats and wastes

We examined existing research on investigating maritime floats and wastes, and found that there were various methods with their own strengths and weaknesses. Based on these existing methods, several questionnaires on maritime floats and wastes were prepared, and were used in field surveys in order to examine the contents and their ease of being filled in. As a result, a standard questionnaire was completed.

Following the creation of the standardized questionnaire, we carried out a field survey of maritime floats and wastes in 40 representative coastal areas in Iwate Prefecture. This fiscal year, the main focus was to understand the general outline of coastal drifts. On the other hand, ascertaining the overall situation and type of drifts visually as well as grasping the amount of drifts accurately were postponed to the coming years. The coast in Iwate Prefecture was generally clean, and many of drifts were natural objects such as seaweeds. However, there was driftwood due to typhoons that hit last year, and many plastic artifacts. Some plastics were identified as having drifted from as far as China and Korea. 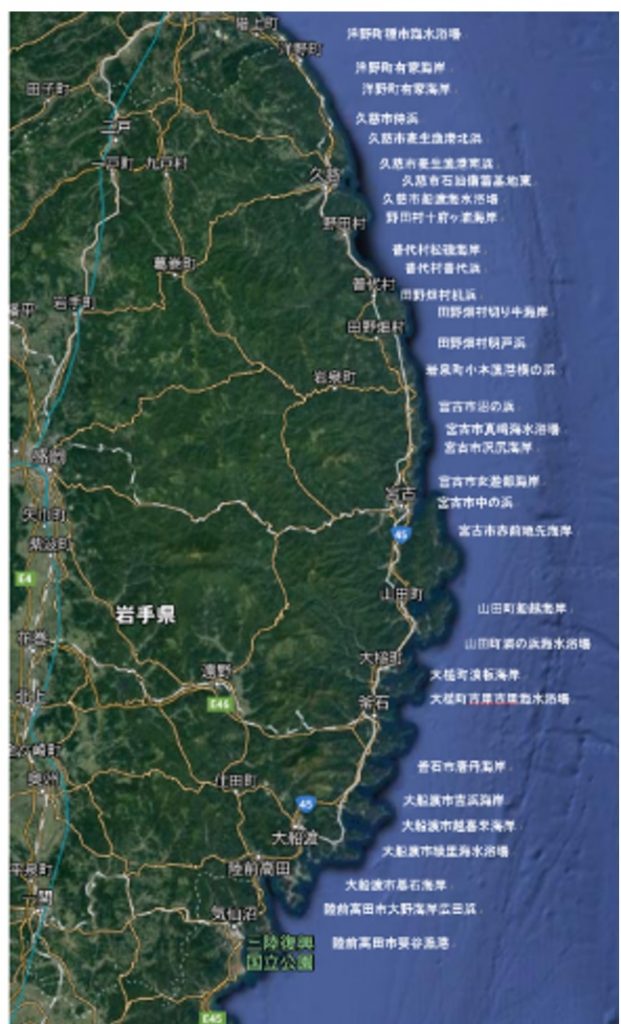 Through the collecting and classifying of coastal drifts, this program aims to become an opportunity for students to think about changing their way of life after cultivating an awareness that the coastal drifts are deeply related to our lives. The evaluation of this program at each school is positive, and there is an intention to implement it again in the next fiscal year. The results of the activities were reported to both the Ministry of the Environment and Iwate Prefecture, as well as the international coast cleanup campaign conducted by the private organization JEAN (Japan Environmental Action Network)

Development of a survey method using a smartphone-based system

In developing the method, based on the real status survey detailed above, public administrative needs were summarized for the case of utilizing the smartphone-based system which had been developed in surveying the distribution of the specified foreign organisms. As a result, the main issues were that it was necessary to grasp the type of coastal wastes present, and that the actual cleaning up activities of citizens were not fully understood.

Here, the following three principals were formulated as the basic design policy of the smartphone-based system. Firstly, the versatility to be used regardless of investigators, survey items etc., the focus to consider only the maritime floats and wastes investigation, and the necessity for visualization of collected data. On top of that, the functions required for the smartphone-based system are listed (below Table). 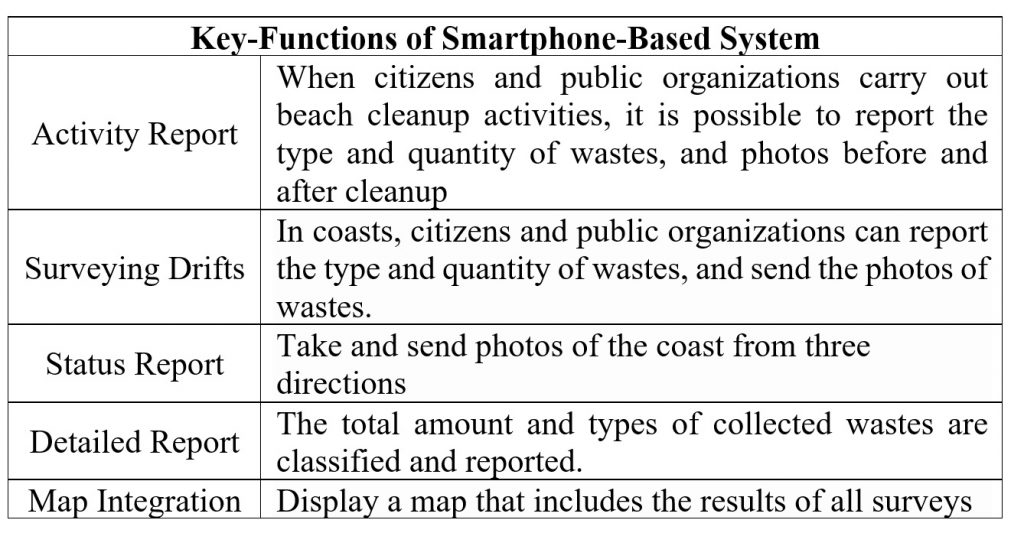 In the trial experiment, the image data obtained in the actual field-survey undertaken by the three schools were registered in the smartphone-based system. Nine students tried to use this system, and examined its usability. Their trials were reported in a questionnaire including a five-level evaluation and free description. As a result, seven students gave high evaluations, for the main function and each survey function with an average score exceeding 4. Regarding the survey report, there was a positive opinion that it is easy to understand as the report can be seen on the map. On the other hand, improvement proposals were also presented:

“When the map is seen on a smartphone, it is difficult to scroll the map, because of being spread over the screen” and “It would be easier to understand if there are some supplemental explanations in operating”,

The basic development of a simple information system using a smartphone that can be investigated by the general public has been completed, but it is necessary to make further improvements that are easier to use. We will continue to develop the system from the next fiscal year in succession.