During the 2018/2019 reporting period, Kobe City University of Foreign Studies undertook a number of activities that underscore its commitment to UNAI and its principles. The following examples stand out as particularly noteworthy:

The first conference was the National Model United Nations (NMUN) New York where the Kobe City University of Foreign Studies delegation represented the Republic of South Africa with Westfälische Hochschule. Six students were representatives of  the General Assembly Second Committee, International Organization for Migration and HRC  Human Rights Council. The delegations also visited the United Nations. Saeko Yoshimatsu and Nanako Ueda (International Relations Department) were chosen a as Assistant Directors for UNESCO https://www.nmun.org/assets/documents/conference-archives/new-york/2018/ny18b-res-unesco.pdf
and CSW https://www.nmun.org/assets/documents/conference-archives/new-york/2018/ny18a-res-csw.pdf in March 2018 and Akiko Teramoto was chosen as a Security Council Chair https://www.nmun.org/assets/documents/conference-archives/new-york/2018/ny18a-res-sc.pdf. Two student delegates Yuka Kimura & Hikari Kobayashi won a Distinguished Position Paper Award and the delegation received an Honorable Mention Award. The Delegation met with H.E. Ambassador Toshiya Hoshino at the  Permanent Mission of Japan to the United Nations of Japan. 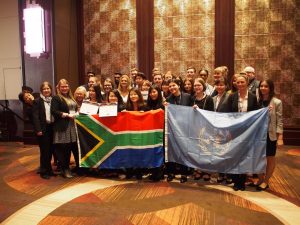 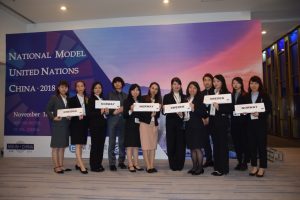 a. Peace and Conflict Resolution

Professor Emeritus Helena Meyer-Knapp (Evergreen State College), an  American professor on peace studies spoke on “Difficult apologies: Good strategies for improving international relations-peace must be dared, peace is inevitable, all wars will end”, on May 11, 2018.
Professor Kunihiko Nagatani (Kyoto University of Foreign Studies) spoke about the importance of collecting testimonies of Atomic Bomb Survivors  and ensuring that they are translated into as many languages as possible. He spoke on turning hate into forgiveness and what he learned through his journey around the world; and the memory of atomic bomb victim Mr. Yasuhiko Takeda. These efforts may contribute to the elimination of all weapons of mass destruction, on November 20, 2018.

Katsuhito Okubo (Japan Youth Platform for Sustainability) outlined the responsibility and opportunity that youth have in seeing that the SDGs are realized by 2030, on  November 9, 2018.
He reported on his participation in the UN  High Level Political Forum on  Sustainable Development; Ensuring Intergenerational Dialogues for Achieving SDGs.