The event was attended by a total of five students who responded to the invitation from the SDGs Promotion Office, including SDGs promoter and students who are actively engaged in the “English Extensive Reading & Listening Marathon.”

Mr. Mark Charlton of DMU explained the purpose of the event, followed by a brief introduction of the two universities. After that, the DMU students and NUT students paired up and moved into breakout rooms, where they presented their own research and exchanged ideas related to the SDGs (2 students x 5 groups).

Each pair was able to exchange a variety of information, such as “in the UK, empty plastic bottles and cans can be redeemed for cash, so we don’t throw them away,” “we are working on ways to carry out our research even amid the COVID-19 pandemic,” and “NUT student taught us about nuclear power and physics!”

As one of UNAI’s Hub Universities, NUT will continue to engage in activities that contribute to achieving the SDGs. 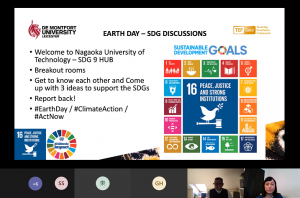 Mr. Charlton gives an explanation of the event