Dr. EDIGARIAN and Ms. KHAN made a courtesy call to Vice President Dr. YUKAWA and Specially Appointed Associate Professor for Academia-Industry Fusion Dr. HATOYAMA prior to the “Japan-Russia Industry, Academia and Government Working-level Conference” held on January 31st in Tokyo, which was organized by the Association of Institutions of Higher Education of the Russian Federation and Japan. They had a discussion and exchanged information about international affairs of both universities.

NUT and Far Eastern State Transport University concluded an Agreement of Academic and Education Collaboration in 2018, and further cooperative study and active exchange of students between both universities are expected. 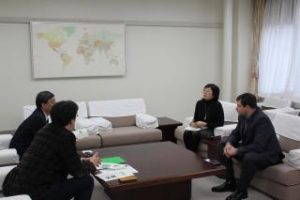