NUT has been developing disaster prevention teaching materials and examining their educational effects and effectiveness with the aim of improving the community's ability to cope with disasters focusing on floods which is the characteristics of disaster in Nagaoka City based on research project entitled "Enhancing Educational and Organizational Resilience" from Comprehensive Collaborative Agreement with TEPCO and Professor Takashi Yamaguchi led "Development of Human Resources for SDGs Disaster Management" as part of it.

This class was one of the results of the recent disaster prevention program.

This class is designed to encourage children to think about the perspectives of disaster response and the best way to respond to a disaster depending on the situation such as "before," "during," and "after" a disaster.

In this class, Prof. Yamaguchi introduced past disasters in the Nagaoka City area and asked the children to think about what kind of disaster could happen nearby and what to do during and after a disaster.

After that, Dr. Nur Adlin Binti Abu Bakar (Assistant Professor) conducted an easy science experiment on electrical equipment and how the circuit breaker works in case of flooding.

The students were told that turning off the circuit breakers would speed up the recovery of electricity, reduce the cause of fires, and help the entire community to recover quickly from the floods.

National Institute of Technology, Kumamoto College and Kagoshima College cooperated in the development of this experimental kit.

A total of 68 students from two classes participated and at the end of the class, children actively voiced their opinions on what they should do in case of a disaster and their understanding of flood prevention was deepened.

NUT will work on promotion of SDGs initiatively by the cooperation with local communities and educational institutions. 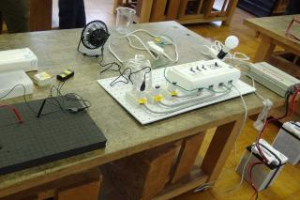 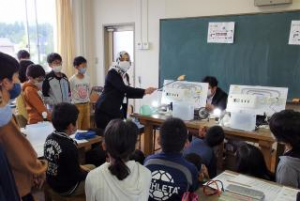 Children getting explanation about a breaker during a flood