Online forum co-hosted by the Romanian-American University and three other universities (2021.5.14)

At the outset, Prof. Serban Georgescu of RAU, (our Bucharest office coordinator), introduced the participants. This was followed by opening remarks from Mr. Hiroshi Ueda, the ambassador extraordinary and plenipotentiary of Japan to Romania, who noted that this year marks the 100th anniversary of the establishment of diplomatic relations between the two countries.
Greetings were then given by Prof. Costel Negricea, (Rector of RAU), Prof. UMEDA Minoru, (Executive Director and Vice President of NUT), Prof. Ioan-Alin Nistor, (Founder of the Japanese Cultural Center at BBU, who also serves as the coordinator of our Cluj-Napoca office), and Prof. Tudor Edu, (Vice Rector of RAU).

This forum was a first attempt at discussing the reshaping of education through innovation and technology, and offered a valuable opportunity to share information between Romania and Japan.
We will continue to develop educational exchanges in collaboration and partnership with the three Romanian universities. 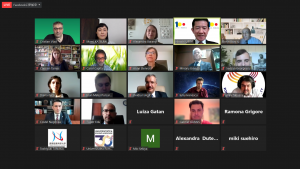