【International lecture】SETSUKO’S SECRET: Heart Mountain and the Legacy of the Japanese American Incarceration(2020.10.26)

Part 1:Speeches by both speakers will be available from 5 PM, October 26 on the JIU Homepage.

・Please watch the video in advance in order to participate in the Q & A session.
・Interpretation will be provided

Please contact us by October 28.The Zoom invitation will be sent to you after registration is completed.

This year, 75 years after World War II, an international lecture and Q & A session will be held at Josai International University. Shirley Ann Higuchi who wrote about the experiences of her parents who met at the concentration camp, and Sam Mihara, who experienced detention, will tell us about their experiences.
The title of the lecture, "SETSUKO'S SECRET: Heart Mountain and the Legacy of the Japanese American Incarceration," is the title of the book published by Shirley in the United States in September this year. Her parents, both Japanese Americans, were detained during World War II in a camp near Heart Mountain, Wyoming.  Shirley inherited her mother’s wish to establish a museum to display photographs of the camp and the relics of prisoners of war and was elected Chair of the Board of the Heart Mountain Wyoming Foundation in 2009 and then inaugurated the Interpretive Center in 2011. In addition, as a pharmacy educator and researcher, her father William, teaches and trains many Japanese pharmacists who have studied in the United States, and has made great contributions to the Japan Pharmaceutical Association.
The lecture will be asynchronous, so please watch the video after 5 PM on October 26th and participate in the Q & A session that will be live-streamed online from 9:30 on October 31st, during the JIU festival. We hope to rediscover historical facts about both Japan and the United States and learn more about complicated issues of racial discrimination.

As children, Shirley Ann Higuchi and her brothers knew Heart Mountain only as the place their parents met, imagining it as a great Stardust Ballroom in rural Wyoming. As they grew older, they would come to recognize the name as a source of great sadness and shame for their older family members, part of the generation of Japanese Americans forced into the hastily built concentration camp.
Only after a serious cancer diagnosis did Shirley's mother, Setsuko, share her vision for a museum at the site of the former camp, where she had been donating funds and volunteering in secret for many years. After Setsuko's death, Shirley skeptically accepted an invitation to visit the site, a journey that would forever change her life and introduce her to a part of her mother she never knew. 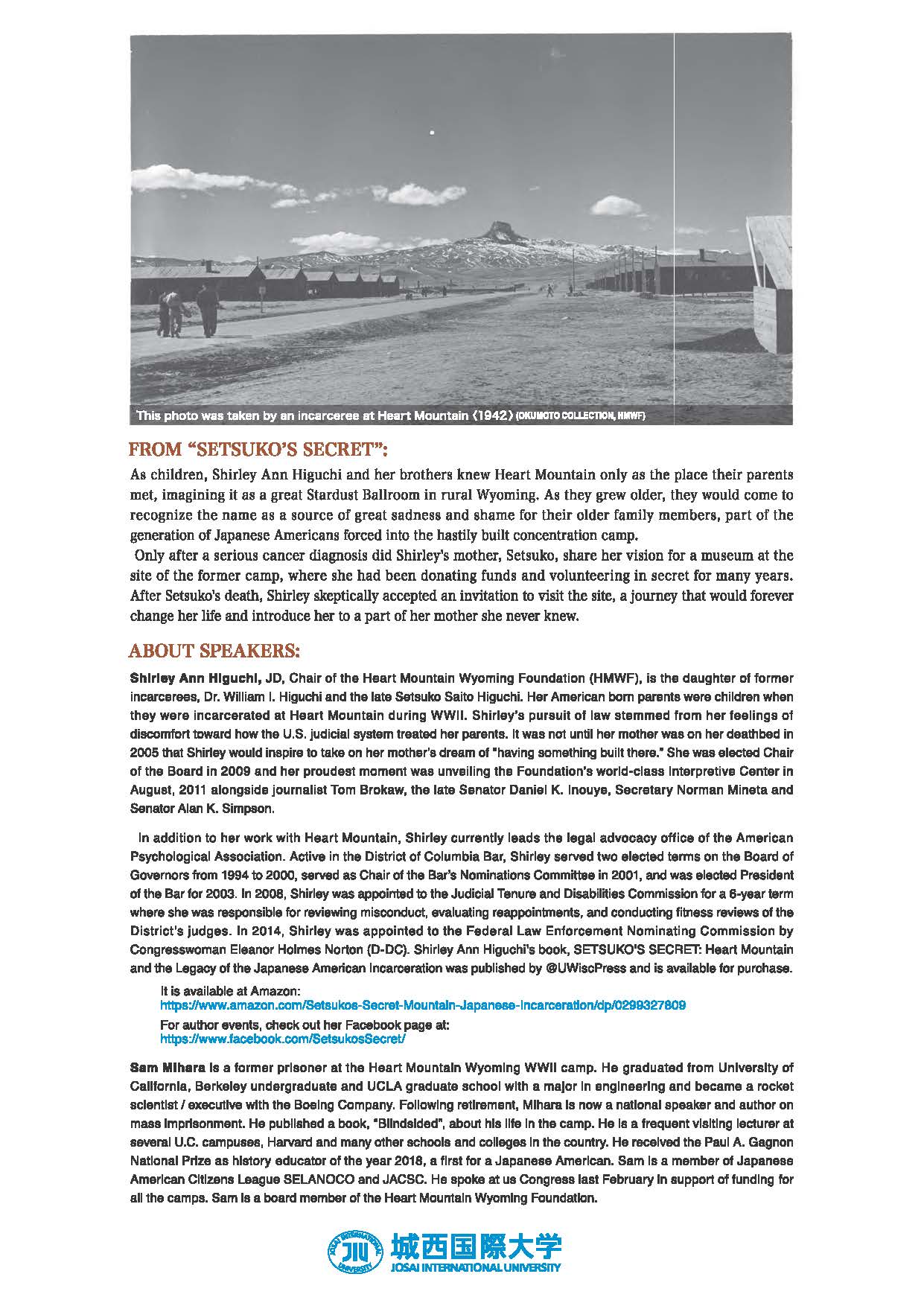