“In the pursuit of attaining competence in the language of ‘commodity’ and ‘enterprise,’ many minority languages and even cultures are sometimes sacrificed.” 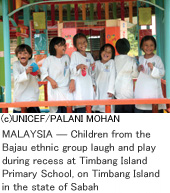 How far do we go in implementing language policies into the education system so as to integrate a nation’s peoples? Nearly all nations identify and determine at least one language as the official language, and some include another as the national language. This is necessary for the obvious reason that a common language would create solidarity and instil a sense of national identity and pride. However, in the pursuit of attaining competence in the language of “commodity” and “enterprise,” many minority languages and even cultures are sometimes sacrificed. Studies show that mothers, the primary supporters of education in most families, take pains to raise their children in the “school” language, rather than their own native tongue. This is to ensure that their children will have a head start as they enter primary or even pre-school.

Multi-ethnic Malaysia is renowned for its success in maintaining a harmonious balance among its people. Many know that the country consists of three main ethnic groups: Malays, Chinese, and Indians. Within each, there are several dialects or variations of the main language. In addition, there are dozens of minority languages spoken all over the country in the peninsula, as well as on the island of Borneo, where the two states of Sabah and Sarawak are located. These people belong to various indigenous communities which come under the Austronesian as well as the Austro-Asiatic languages.

The official and national language in Malaysia is Malay, or Bahasa Malaysia, and is “the basis for national integration.”1 However, the Government of Malaysia recognized the importance of English as an international language and added that “measures will be taken to ensure that English is taught as a strong second language.”

In efforts to maintain the languages of the other two main ethnic groups, the government provides two different types of schools at the primary level: “national schools” where the medium of instruction is Malay, and “national-type” schools where the medium of instruction is either Chinese or Tamil. It would be naive to exclude the fact that this is a politically-driven move, given the fact that the ruling government is a coalition of the three major races. Still, it is a great effort to ensure the sustainability of these languages up to a certain point. Even within the three major ethnic groups, dialectal differences exist (Tamil to lesser extent). Malays, who speak no less than ten different dialects based on their geographical locations, may lose their dialects if there is no “intergenerational transfer.”2 As long as families use their dialects and pass them on to the next generation, there is hope that these dialects will stay alive.

The Chinese speak in different dialects — for example, Foochow, Cantonese, Hokkien, Hakka, etc — based on ethnic origins. However, as children sent to Chinese schools learn in Mandarin, the official medium of instruction, their families start speaking to them in Mandarin from a young age, even before they go to school, so they can cope with their lessons. Mandarin is the language of choice for this group of people since it is perceived by them more and more as the mode of communication for trade and economy. No one can dispute the position of the Mandarin-speaking world as the next or current economic giant. The more these parents foresee their children as being a part of this future “world,” the more Malaysian Chinese children may lose their own language and culture.

That said, in the case of Malay, Chinese, and Tamil, the risk of total loss of language or dialect is negligible, as demographically these three ethnic groups are very stable. Out of a total population of 28.25 million,3 Malays comprise approximately 50.4 per cent, Chinese 23.7 per cent, and Indians 7.1 per cent. As with the Chinese dialects, the Malay dialects have been researched and documented by various academics, both locally and abroad, and there is still strong ethnolinguistic vitality among their speakers. In one study, linguists found that “the more vitality an ethnolinguistic group enjoys, the more it will be able to use its own language so as to survive and thrive as a collective entity.”4

The fate of smaller language communities in Malaysia may not be as positive. The hundreds of existing smaller communities make up a total of 18.8 per cent of the population. The indigenous languages found on the peninsular side of Malaysia can be divided into three major language groups: the Negrito, Senoi, and Malayic (also known as Proto-Malay); these can then be further divided into more than 18 subgroups according to their different languages and cultures.

In a 2006 study on the Mah Meri people,5 who speak a language which is part of the Senoi language group, it was found that among third generation Malaysians, the use of their native tongue was slowly diminishing. All children are sent to school until at least the age of fifteen. A handful have made it to tertiary education. Within the culture, there is an emphasis on education, and some of the Mah Meri people aspire to assimilate into the Malay community through their speech as well as through their attire. In fact, when interviewed for the study, they claimed to have pride in their own language but questioned why they should learn it. Their language does not serve any instrumental purpose for them to pass on to the next generation. One female interviewee even remarked on the “not so nice sounds” that emanate from the speech of her native tongue, compared to the more pleasant sounding Malay language. This group of people live in a suburban area which provides them easy access to jobs in nearby towns and people from other language communities, for example, the Malays, Javanese, and Chinese. Even as they use their mother tongue, there are many Malay and English terms which have found their way into the Mah Meri language.

Another group I visited, the Jakun people from the Malayic language group, live on the periphery of Endau-Rompin National Forest Reserve Park, isolated from other communities. It takes about three hours of travelling in a four-wheel drive vehicle on dirt and jungle tracks in order to reach their village. Even though this group of people live isolated from other communities, they are not isolated as a people. Many work in the national park as cleaners at the chalets, and some have jobs as mandatory local guides for tourists who want to go jungle trekking. In a way, this forces the Jakun to learn not only Malay, but also English, as many of the tourists come from abroad. It is instrumental for the Jakun to be proficient enough in English in order to impart their local knowledge to the tourists. For instance, they need to teach survival techniques in the jungle, including necessary “do’s and dont’s” that are esoteric to their own culture.

The Kanaq, also from the Malayic group, is one of the most endangered communities in the peninsula, with only 83 people left. This group is somewhat introverted, and education for their children is not a main priority, even though school is within easy access and transportation is specially provided for the children to and from school in the morning and at the end of the day. But often the children come home at midday on their own. According to one mother, they may decide to come home when they are bored, scolded by the teacher, or teased by other students. They prefer to keep to themselves and do not open up very easily to outsiders. Although their language has been maintained, they claim not to have any folk tales or cultural beliefs. I’m not sure if this is really the case. The greater possibility is that, unlike the Jakun and the Mah Meri, the Kanaq do not place importance on passing down their oral traditions. So this may be something that the community has lost irreversibly, even though they more or less managed to maintain their language. From my own observation, this particular community does not seem to have any ambition to move up on the social or economic ladder. It would be enlightening to see if this lack of interest in education and introversion corresponds to their ability to maintain their own language.

In the states of Sabah and Sarawak on the island of Borneo, the dominant languages that cut across ethnic boundaries are Kadazan-Dusun and Iban. Even though Malay is still taught in schools and is the main medium of instruction, Kadazan-Dusun is used in Sabah, and Iban is used in Sarawak for the purposes of social networking, shopping, and local business transactions. The Iban and Kadazan-Dusun languages are even taught in schools in Sarawak and Sabah. In Sarawak, there are dozens of indigenous groups. The largest is the Iban. One of the smallest is the Lugat people, who numbered only 37 when I visited them in Sarawak in 2006. They live up the Rajang River and the quickest way to visit their longhouse is by boat. The longhouse is shared with the Tatau people, also a small community. It was found that among smaller communities like the Lugat and Tatau, culturally exogamous marriages are common. Many are found to intermarry with the more dominant Iban group. Naturally, the Iban language takes precedence as a language of choice within an exogamous marriage, as the lingua franca in Sarawak is more often Iban. Driven by the desire for higher education and a better way of life, even among the smaller indigenous groups in Sarawak and Sabah, people learn and actively use Iban/Kadazan-Dusun, Malay, and English.

Malaysia is extremely lucky to be blessed with such diverse ethnic groups. According to the United Nations Educational, Scientific and Cultural Organization (UNESCO) and the Asia/Pacific Cultural Centre for UNSECO, a non-profit organization, Malaysia has a literacy rate of more than 93 per cent.6 As far as language planning policies go, the government has been successful in ensuring that all its people are at least orally proficient in the national language, thus inculcating national pride and identity. With a common language we have one nation, breaking down all barriers to communication and understanding. Many interested parties, foundations, and researchers, local and abroad, endeavour to describe and document the various minority languages in Malaysia for the purpose of sustainability. We cannot stop the wave of modernization and the advancement in social standing through education in the formal languages. But at the same time it is imperative that we make an equal effort to maintain the diverse native languages and cultures of people. Otherwise, we will be faced with the risk of erasing minority languages from the face of the Earth. unc Notes