“Since its establishment twelve years ago, the Network has promoted the mobility of students and academic staff, organized scientific meetings, summer schools, and workshops in different fields. Today it is an extremely valuable platform for cooperation, professional exchanges, and long-lasting human connections.” 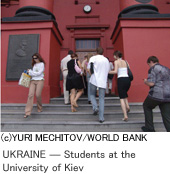 The Black Sea region has been defined as a cradle of human civilization. Among its past historical riches, the region is home to the Legend of Jason and the Argonauts and their search for the Golden Fleece, and the biblical account of Noah’s Ark. Athens, Istanbul, Odessa, Sevastopol, Troy, and Yalta are just a few of the names on the Black Sea coast that have a place in world history.

In antiquity, the concept of university as an arena for free debates, and profound analyses on subjects of major concern for individuals and communities, has been conceived and developed in the Black Sea region. From the crusades and the Golden Hoard to the collapse of the Soviet Union, the region has witnessed multiple religious and political changes. In the face of countless conquests through the ages, the people of the region have endured and today represent a remarkable mixture of cultures and religions. With a large stockpile of oil, gas, and mineral resources, with excellent conditions for agriculture and located at the crossroads of east-west, northsouth transport corridors, the Black Sea region has large economic potential. According to the World Bank, with 336 million inhabitants populating 19 million square kilometres the region had a growth rate of 7.3 per cent in 2006 generating a combined gross domestic product of $1.3 billion.

However, the Black Sea region still suffers from several unresolved conflicts in Trans-Dniester, Nagorno-Karabakh, Ossetia, and Kosovo. Industrialization, extensive and intensive farming, and regional population explosion have caused irreversible soil degradation, overfishing, eutrophication, and the flow of chemical and radioactive poisons into the Black Sea. As a consequence, the sea is in danger of becoming a toxic and nearly lifeless ecosystem — an ecological disaster with few equals. In order to address these challenges, following a recommendation of PABSEC or the Parliamentary Assembly of the Black Sea Economic Cooperation, the Black Sea Universities Network was established in 1998 at the second Conference of Rectors from the Black Sea Region.

Since its establishment twelve years ago, the Network has promoted the mobility of students and academic staff, organized scientific meetings, summer schools, and workshops in different fields. Today it is an extremely valuable platform for cooperation, professional exchanges, and long-lasting human connections.

The fundamental pillars of the Black Sea Universities Network are:

I shall present a few achievements facilitated under the framework of this Network. The Black Sea region witnessed environmental disasters like Chernobyl, spills in the Azov Sea, and industrial complexes that look like landscapes from other planets. Since its establishment, the Black Sea Universities Network has concentrated on the sustainable development of the region. The Kiev Declaration of the University Rectors for the Sustainable Development of the Black Sea Region, signed on the occasion of the Network’s 2008 Congress, states: “We believe that urgent actions are needed to address these fundamental problems and reverse the trends. Equilibrated demographic policies, eco-innovation by adoption of environmentally sound industrial and agricultural technologies, reforestation, and ecological restoration are crucial elements in creating an equitable and sustainable future for all citizens of our region in harmony with nature. Universities have a major role in the education, research, policy formation, and information exchange necessary to make these goals possible.”

The outcome of this Declaration is visible in the many universities in the region which have introduced new programmes on sustainable development at the bachelor’s, master’s, and doctorate levels and more environmental curricula both leading to a more active involvement by students. New cooperation has been recently initiated with the Baltic University Programme, a regional university network, to generate synergies between the Baltic and Black Sea regions on education for sustainable development.

The second example of the Network’s activities is in the preservation of minority languages. During the centuries of clashes between military and political powers in the Black Sea region, the local communities suffered complex processes of relocation, division, or reconsideration of their political, economic or religious rights. A typical case is that of the Crimean Tatars whose relocation from Crimea started at the end of eighteenth century. But the most dramatic phase had been under Joseph Stalin whose directive on 18 May 1944 led women, children, and the infirm to be loaded onto trucks, taken to the nearest train station, loaded onto cattle wagons, and shipped off to Central Asia, the Urals, and other remote areas of the Soviet Union. After fifty-five years, the survivors have succeeded in obtaining the right to return to their homeland. But, overlapping with the collapse of the former Soviet Union and without any political, legal or economic support, the reintegration of the Crimean Tatars opened a new drama in the region which may turn explosive in the future.

The Black Sea Universities Network has addressed this issue very carefully. The Taurida National University and the Technical and Pedagogical University of Crimea (TPUC), in cooperation with the National Technical University of Ukraine (NTUU), developed advanced quantitative models and are offering decision makers and civil society tools for analyses and simulation of economic, political, legal, or environmental outcomes in the Crimean subregion. A working group at TPUC dedicated to the reform of the Crimean Tatar language is currently working with Ovidius University of Constanta in Romania and Sakarya University in Turkey. In addition, the Network, in cooperation with the European Council and European Commission, organized an International Conference on the Protection of Minority and Regional Languages in Bucharest in December 2008, which evaluated the status of implementation of the European Charter of Regional and Minority Languages.

As a case study, the status of the Crimean Tatar language used in Bulgaria, Romania, the Russian Federation, Turkey, Ukraine, and several other countries was assessed and a report presented at the First World Congress of Crimean Tatars held in Simferopol in 2009. This was followed by a special committee from TPUC and other organizations to reform the Crimean Tatar alphabet from Cyrillic to Latin, and the first draft of the proposed reform has been distributed to the Network’s member universities in Azerbaijan, Romania, the Russian Federation, Turkey, and Ukraine. In parallel, a programme to teach the Crimean Tatar language in Romania and Ukraine has been developed by TPUC and Ovidius University of Constanta with the support of the ministries of education of Romania and Ukraine. Under the agreement, workshops, seminars, training courses, and debates about the curricula, lesson planning, teaching technologies, and support activities were organized using information and communication technology tools and a dedicated website. Recently, a group of four teachers and thirty Tatar pupils between the ages of eight and sixteen from Romania participated in a summer camp in Staryi Krym, together with their colleagues from Crimea, Ukraine. Coordinated by TPUC, the camp aimed to test the final curriculum, teaching plans, and methodologies that would be used as standard reference for teaching the Crimean Tatar language in Romania and Ukraine.

The third example of activities developed by the Black Sea Universities Network is in the area of energy security and renewable energy sources. The Black Sea region has large energy resources and is an important transit platform for oil and gas flowing to the European Union countries.The environmental problems in the region however have a direct impact on the exploitation of renewable energy sources, which is possible only with cross-border cooperation. Unfortunately, with conflicts and clashes between different communities over investment projects, including the exploitation of renewable energy sources, the region has inherited a noncooperative mentality.

In order to address this, in 1998, the Black Sea Universities Network, with the support of the NATO Science Program, Duke University, USA, and a large group of scientists from different universities in the Black Sea region and worldwide, established the Centre for Advanced Engineering Sciences (CAES) to exchange ideas and initiate joint research projects. In 2006, at the Network’s Congress held in Varna, Bulgaria, a sustainable energy strategy for the region emphasized the role of universities in promoting solutions. Soon the Network established various partnerships: with the International Centre for Hydrogen Energy Technologies, a project of the United Nations Industrial Development Organization in Istanbul, for cleaning up the river waters and wetlands; with the European Commission’s Joint Research Centre in Petten, Netherlands for development of a regional Summer School on Fundamentals of Fuel Cell Technologies; and with the Italian National Agency for New Technologies, Energy and Sustainable Economic Development in Rome for the preparation of multimedia training on energy management and renewable energy sources. As an exploratory project, five member universities, namely, Istanbul Technical University, Taurida University, Technical University of Moldova, Technical University of Varna, and Ovidius University of Constanta decided to harmonize their master’s degree programmes on energy management and prepare a future regional joint degree programme.

Even if the main focus of the Black Sea Universities Network is cooperation in education, the participation of its member universities in research and innovation activities is of equal importance. In 2008, CAES represented the Network in a pilot project on knowledge and innovation communities called SUCCESS or Searching Unprecedented Cooperation on Climate and Energy to ensure Sustainability that defined requirements for future knowledge and innovation communities. Following this, CAES was selected as a partner in the European Institute of Innovation and Technology (EIT) sustainable energy project — InnoEnergy. The EITInnoEnergy Consortium is coordinated by Karlsruhe Institute of Technology in Germany, grouping leading universities, research institutions, and innovative companies, and “envisions paving the way for an independent and sustainable energy system enabling a climate-neutral Europe by 2050.by successful commercialization of innovations.”

In 2010, the Black Sea Universities Network, the Eurasian Universities Association, and the Association of Universities from the Caspian Sea Region organized a forum on higher education at Moscow State University. With more than one thousand participants, the event captured the attention of the larger region’s academic community. Speakers said that the Black Sea region universities should take into account the social demands of their communities when considering the creation, development, and transfer of and inquiry into scientific, technological, and cultural issues. Likewise, universities should think about the scientific and technical support they can provide their communities in their cultural, social, and economic development. But more than ever, the speakers argued, universities should assume a leading role in society and participate actively in crucial decisions by providing innovative solutions for the sustainable development and welfare of their communities.