“If we look inside the “civil society basket,” we find that the overwhelming majority of spokespersons come from NGOs. They are often articulate advocates of important values and positions but do not have a mandate to speak for those most directly concerned by the MDG targets.” 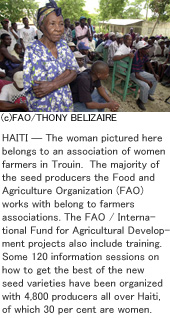 The UN Chronicle has evolved over the past years into an increasingly attentive and inclusive journal. The focus of each number on a specific issue, like climate change or disarmament, makes it possible to examine these questions from a variety of viewpoints. Its contributors testify to its broad geographic outlook. Recent issues have featured articles by academics, UN officials, government representatives, non-governmental organizations (NGOs), and recently, the fanciful innovation of testimony by novelists. What are largely missing, however, are the voices from people’s organizations directly representing those sectors of the population most affected by the issues under discussion.

Not surprisingly, these same voices are generally missing from the current debate around the Millennium Development Goals (MDGs). The MDGs were crafted a decade ago in a process from which civil society was excluded despite its intensive participation in the Summits of the 1990s from which the goals were distilled. There was only token civil society participation in the Millennium Summit and the subsequent Millennium +5 Summit, although the 2005 scenario did see the introduction of an interactive dialogue between civil society and the General Assembly three months before the main event. The situation is a little better in 2010 — selected civil society representatives have participated in the MDG Summit Roundtables on 20-22 September 2010, and the outcome of the interactive dialogue held from 14-15 June 2010 was considered as a formal input to the preparation of the Summit outcome. However, if we look inside the “civil society basket,” we find that the overwhelming majority of spokespersons come from NGOs. They are often articulate advocates of important values and positions but do not have a mandate to speak for those most directly concerned by the MDG targets. Out of the fifty-two speakers at this year’s interactive dialogue, forty-five were from NGOs, and only seven from people’s organizations: five representing rural and indigenous women, one from an international trade union, and one from a disabled people’s organization.

What does it matter who speaks, one might ask, so long as the “right” views are voiced? For one thing, people who take it upon themselves to speak on behalf of others often get it wrong, however well-intentioned they may be. The advocacy platforms of international NGOs may contain planks that contrast with the agendas of the sectors of the world’s population “on behalf of whom” they are lobbying, but with whom they have not necessarily consulted.1 For another, those most affected by poverty, hunger, and violence against women are not just victims of problems, they are also the prime actors in finding solutions. The practices they have developed in coping with difficulties are often take-off points for alternative solutions, like the pro-poor housing promoted by community members of the Shack/Slum Dwellers International network. Finally, people’s organizations are key to mobilizing political will for change and resistance to the arrogant super-power of economic interests. Small family farmers are the majority of the electorate in West African countries, yet their voices have been ignored for decades. However, now that they have self-organized into the Network of Farmers’ and Agricultural Producers’ Organisations of West Africa (ROPPA) Peasant Organizations and Producers in West Africa representing some fifty million farmers, their governments have learned that it is better to have the peasants with you than against you, and are starting to stand up to conditionalities imposed from outside.2 People’s organizations have a fundamental role to play in ringing out the era of impunity, as UN Secretary-General Ban Ki-moon has put it, and ushering in a new age of accountability.

If it is indeed important to empower people’s organizations to speak for themselves, what would it take to make it happen in the UN context? One fundamental step is to respect the requirements for meaningful dialogue with organizations that are geographically scattered throughout the peripheries of the world, are not necessarily English-speaking or eternally hooked up to the internet, and are committed to consulting with their base before taking decisions. These conditions include ensuring their timely access to strategic information in a form that is accessible to them and their members; recognizing their right to self-organize and to select their own spokespersons; respecting their languages, agendas, time-frames, and consultation practices; and mobilizing the necessary resources to meet these requirements.3 Another step is that of making progress in linking the recommendations that emerge from UN global policy forums to action that makes a difference in people’s lives at the local level. This de-link — a problem the whole system faces — has been identified by people’s organizations as a major limitation of those UN policy forums in which their voices are heard, like the Permanent Forum on Indigenous Issues or the Commission on Sustainable Development. People’s movements do not have time to waste in talk shops that do not advance their agendas. In a word, the UN system needs to be able to involve people’s organizations in the political process, enabling them to have a meaningful impact on intergovernmental decision-making, rather than calling them in as bit players in window-dressing adherence to the rhetoric of participation and good governance.

Does this sound like a tall order? The good news is that these principles are already being put into practice around some of the key issues that the UN system is addressing. The global governance of food is one of these. The crisis in food price of late 2007 opened up a political opportunity for engagement with small food producers’ organizations, which have been building up their networks and capacity for intervention in policy forums since the World Food Summits of 1996 and 2002. The reform of the Committee on World Food Security (CFS), housed in the Food and Agriculture Organization, was negotiated during 2009 through an innovative and inclusive process that accommodated unprecedented quality input by these networks. The result has been the birth of a “new” CFS in which civil society — with the accent on organizations representing those most affected by food insecurity — will be full participants in a year-round process that enables non-state actors to help frame the terms of the debate. The process aims at building two-way links between multi-actor policy spaces at national, regional, and global levels. The new CFS was inaugurated in October 2010 and the voices of people’s organizations came through strong and clear, along with those of governments and UN officials. Change in the direction of more legitimate global governance practices is not only necessary, it is possible and is happening.