“We also need better understanding of what happens to rural people and their cultures when they are forced from their home localities or even far from familiar regions and ecosystems.” 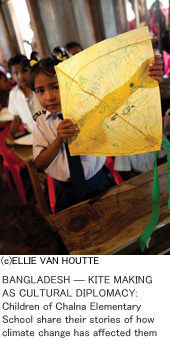 One of the myths current today, spread by media events such as Al Gore’s film, An Inconvenient Truth, is that everyone will be equal in facing the ecological and human catastrophe of climate change. This is simply not true. Clear thinking about climate change and its likely impact on cultural integrity, transmission, and diversity requires that one take note of the glaring differences today among people on the planet.

Climate change will produce winners and losers. Africa and poor Africans will be more heavily impacted.1 They and their governments have meagre technical and financial resources to provide capital-intensive buffers against the impact of climate change. For example, only one per cent of African agriculture uses irrigation.2 Most people in rural sub-Saharan Africa to some extent remain dependent on rain-fed agriculture and livestock. While this is also true of a substantial number of rural people in northern China, parts of South and South-East Asia, Central America and the Andean countries, in most cases the nation-states in those regions have more capacity to assist rural people in adapting their livelihoods.

Cultural adaptation to climate change is going on right now. Isolated groups of rural people in the Andes, the mangrove-forested coasts of South-East Asia, and the savannas of Africa are not passively waiting for experts to come and tell them how to adapt. It is urgent to understand how rural people understand climate change and what they, themselves, are doing about it. Capacity for doing the participatory action research required to reveal spontaneous adaptation needs to be built up in countries where, to date, the emphasis has been on technical modelling and national policy formulation.

Climate change will exacerbate current trends in rural depopulation, international wage migration, forced displacement due to mega-projects, and the flight of people from conflict areas. Today international institutions and non-governmental organizations are experienced in dealing with the problems produced by refugees and displacement. The Office of the United Nations High Commissioner for Refugees is one, the International Organization for Migration is another, the United Nations Development Programme has specialists who work on post-conflict recovery issues and UNICEF, the United Nations Children’s Fund, has developed expertise in providing continuing education for the children of the displaced. Yet none of these agencies has enough resources, and the demands on them are bound to increase. They need more financial support.

We also need better understanding of what happens to rural people and their cultures when they are forced from their home localities or even far from familiar regions and ecosystems. Specialist academic and clinical centres in the world have worked for some time on post-conflict issues. In a similar way, many centres of development studies have done research on employment strategies, retraining people for new livelihoods, and creating jobs. The health specialty known as “cultural psychiatry” has concerned itself with the impact of migration from one culture to another, but the treatment is individualistic; it is not concerned with the impact on the culture per se, or its transmission and survival. Developing regional centres that study this set of problems from an applied point of view is also an urgent priority.

From this sketch of the key issues, nine specific recommendations follow:

1 Fourth Assessment Report of the Intergovernmental Panel on Climate Change, 2007.