“More deliberate efforts are therefore required to redress the situation, with more emphasis placed particularly on education, as most poverty-reduction interventions depend on the availability of human capital for spearheading them.” 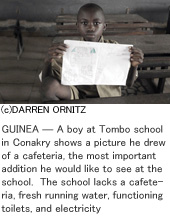 There is no strict consensus on a standard definition of poverty that applies to all countries. Some define poverty through the inequality of income distribution, and some through the miserable human conditions associated with it. Irrespective of such differences, poverty is widespread and acute by all standards in sub-Saharan Africa, where gross domestic product (GDP) is below $1,500 per capita purchasing power parity, where more than 40 per cent of their people live on less than $1 a day, and poor health and schooling hold back productivity. According to the 2009 Human Development Report, sub-Saharan Africa’s Human Development Index, which measures development by combining indicators of life expectancy, educational attainment, and income lies in the range of 0.45-0.55, compared to 0.7 and above in other regions of the world. Poverty in sub-Saharan Africa will continue to rise unless the benefits of economic development reach the people. Some sub-Saharan countries have therefore formulated development visions and strategies, identifying respective sources of growth.

The Tanzania Development Vision 2025, for example, aims at transforming a low productivity agricultural economy into a semi-industrialized one through medium-term frameworks, the latest being the National Strategy for Growth and Reduction of Poverty (NSGRP). A review of NSGRP implementation, documented in Tanzania’s Poverty and Human Development Report 2009, attributed the falling GDP — from 7.8 per cent in 2004 to 6.7 per cent in 2006 — to the prolonged drought during 2005/06. A further fall to 5 per cent was projected by 2009 due to the global financial crisis. While the proportion of households living below the poverty line reduced slightly from 35.7 per cent in 2000 to 33.6 per cent in 2007, the actual number of poor Tanzanians is increasing because the population is growing at a faster rate. The 2009 HDR showed a similar trend whereby the Human Development Index in Tanzania shot up from 0.436 to 0.53 between 1990 and 2007, and in the same year the GDP reached $1,208 per capita purchasing power parity. Again, the improvements, though commendable, are still modest when compared with the goal of NSGRP and Millennium Development Goal 1 to reduce by 50 per cent the number of people whose income is less than $1 a day by 2010 and 2015.

More deliberate efforts are therefore required to redress the situation, with more emphasis placed particularly on education, as most poverty-reduction interventions depend on the availability of human capital for spearheading them. The envisaged economic growth depends on the quantity and quality of inputs, including land, natural resources, labour, and technology. Quality of inputs to a great extent relies on embodied knowledge and skills, which are the basis for innovation, technology development and transfer, and increased productivity and competitiveness.

Adding to this number the students in non-university tertiary institutions totalled 50,173 in 2009/10 and the overall tertiary enrolment reached 169,124 students, providing a GER of 5.3 percent, which is very low.

The observed transition rates imply that, on average, 370,875 primary school children terminate their education journey every year at 13 to 14 years of age in Tanzania. The 17- to 19-year-old secondary school graduates, unable to obtain opportunities for further education, worsen the situation and the overall negative impact on economic growth is very apparent, unless there are other opportunities to develop and empower the secondary school graduates. Vocational education and training could be one such opportunity, but the total current enrolment in vocational education in Tanzania is about 117,000 trainees, which is still far from actual needs. A long-term strategy is therefore critical to expand the capacity for vocational education and training so as to increase the employability of the rising numbers of out-of-school youths. This fact was also apparent in the 2006 Tanzania Integrated Labour Force Survey, which indicated that youth between 15 and 24 years were more likely to be unemployed compared to other age groups because they were entering the labour market for the first time without any skills or work experience. The NSGRP target was to reduce unemployment from 12.9 per cent in 2000/01 to 6.9 per cent by 2010; hence the unemployment rate of 11 per cent in 2006 was disheartening.

One can easily notice that while enrolment in basic education is promising, the situation at other levels remains bleak in meeting poverty reduction targets. Moreover, apart from the noticeably low university enrolment in Tanzania, only 29 per cent of students are taking science and technology courses, probably due to the small catchment pool at lower levels. While this is so, sustainable and broad-based growth requires strengthening of the link between agriculture and industry. Agriculture needs to be modernized for increased productivity and profitability; small and medium enterprises, promoted, with particular emphasis on agro-processing, technology innovation, and upgrading the use of technologies for value addition; and all, with no or minimum negative impact on the environment. Increased investments in human and physical capital are also highly advocated, focusing on efficient and cost-effective provision of infrastructure for energy, information and communication technologies, and transport with special attention to opening up rural and other areas with economic potential. All these point to the promotion of education in science and technology. Special incentives for attracting investments towards accelerating growth are also emphasized. Experience from elsewhere indicates that foreign direct investment contributes effectively to economic growth when the country has a highly-educated workforce. Domestic firms also need to be supported and encouraged to pay attention to product development and innovation for ensuring quality and appropriate marketing strategies that make them competitive and capable of responding to global market conditions.

It is therefore very apparent from the Tanzania example that most of the required interventions for growth and the reduction of poverty require a critical mass of high-quality educated people at different levels to effectively respond to the sustainable development challenges of nations.